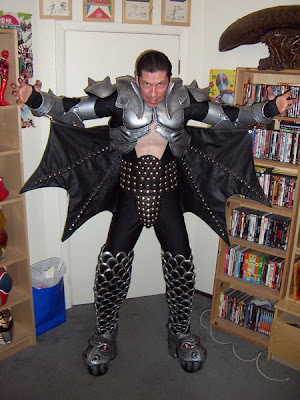 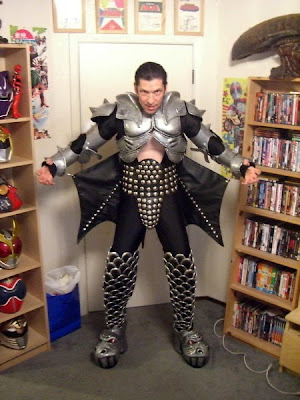 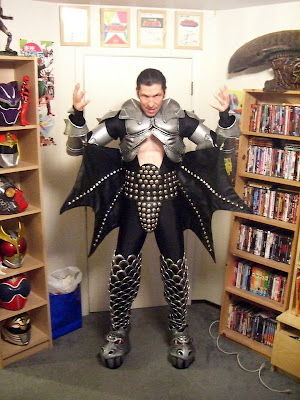 The first time I ever encountered Kiss was My older brother took me along to girl's house he was trying go out with and she just bought Hotter then Hell. I sat there and stared at that cover for over 45 minutes and I was riveted to the music. I never heard anything like that before. I went home that night and found 3 Kiss songs on a compilation 8 track cassette my brother had. We went to see them for the first time and they were wearing the Alive suits and I made my first Gene costume from photos in the Alive LP.
When Destroyer came out and I saw that Ken Kelly artwork of their new suits I was in awe. When photos were floating around in magazines and I saw that armor suit all I could think about was getting one or making it. I tried a few times to make a suit like that unsuccessfully.
Well, fast forward some 30+ years later while on the internet looking at Kiss photos I see a link to a kiss costume website. I could not stop looking at the photos and reading the articles. I try to find out who this Barry Carr is. I finally find him on Facebook and E-mail him. After a bunch of e-mails and seeing his other Kiss costumes I was hooked. I talked to a few people who own his suits and they swore by him and his costumes. After some wheeling and Dealing I have him get started on my Destroyer suit. I mean the anticipation of finally owning the suit that I lusted after for over 3 decades was in reach. After sending in my deposit and measurements It was all going to happen. Barry was a pleasure to deal with and knows his shit for sure. Just yesterday the boxes arrived and I was almost shaking as I took them in. The suit was beyond my wildest expectations. It was awesome to say the least. I wore it for over an hour. I could not stop looking in the mirror. I am a costume and prop maker and i know when a costume is done right and how much effort goes into something and this is 100% top notch craftsmanship. I am now one happy son- of-a -bitch.
Thanks so much Barry...
Barrie.
Posted by KISS COSTUMES at 10:10 PM 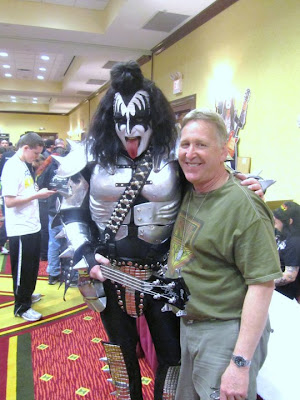 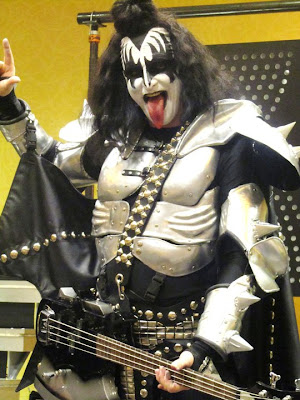 I just wanted to say thank you for all the hard work you put into my "Sonic Boom" costume. I just attended the Expo at Indy and fans were blown away by the outfit. A few even asked if I were Gene. I had a blast and I owe a large part of that to you. You rock sir!
Thanks,
Bill France
Posted by KISS COSTUMES at 5:43 PM 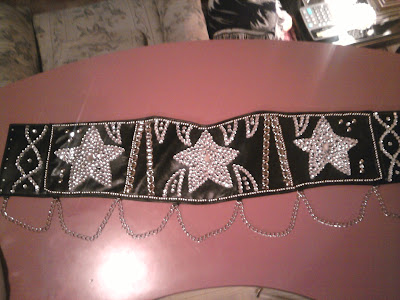 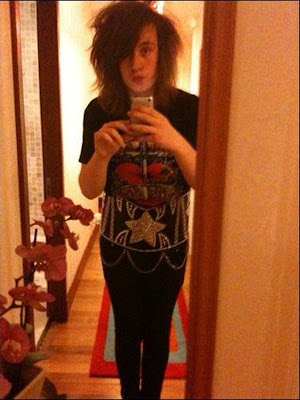 Barry , I cannot thank you enough for this belt , Totally stunning .
Lights really set it off , I want to keep it in good condition for as
long as possible so I am keeping it in a display case in my room
untill Halloween and other events. Maybe someday I can meet Paul and
show it to him and maybe he can get a new one made by you :-)

Once again Thankyou Barry
Your friend , Michael.
Posted by KISS COSTUMES at 8:06 AM 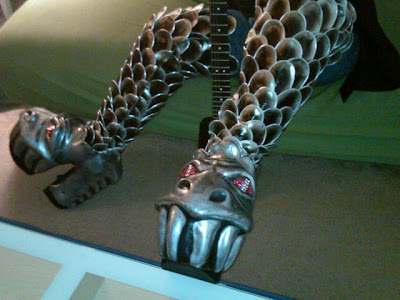 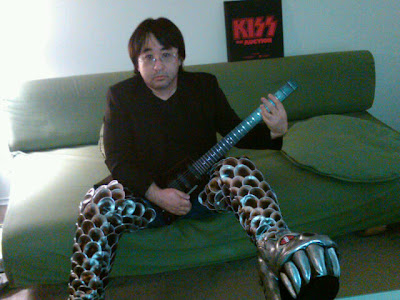 In 1982 I went to see KISS, live in Los Angeles. While I was enjoying some of my favorite music, I noticed a member of the audience was wearing Gene's dragon boots. I was shocked to see someone wearing such an authentic replica. Getting a pair of those boots for me would be something that would stick with me for the next 22 years. Little did I know that when the time would come for me to finally purchase these boots, it would begin an ordeal that would leave me without $1,600 and no boots to show for it.

In 2004, I was surfing the web and found the website “Hotter than hell”. They advertised that they were selling all KISS costumes, so I contacted the owner, Scott McClusky. Scott told me the cost of the dragon boots would be approximately $2,000. Disappointed, I told him I could not afford that. A few weeks later, Scott sent me an email saying that he got a large shipment of the boot's material and he could now sell me the boots for $1,600 (something I could afford). Scott told me the process for purchasing these boots would be a payment through Western Union. It was until later, after I sent the money, I was informed by the police that all cons use Western Union
in order to avoid being traced.

The due date for my boots to be delivered had passed. Time and time again Scott would push back the due date. We would go back and forth through emails and phone conversations. Countless times Scott would change the date, excuse after excuse. In-between his bogus excuses, Scott would email me pictures of the boots saying, "Their almost done, toshi!" Our last communication came when he had once again pushed back the due date saying, "Sorry my daughter spilled glue all over the boots and I have to repaint them." My boots were to be delivered in a few days prior to that last email. Once Scott informed me that he once again could not send the boots, I lost contact with him. No more did he reply to my emails or answer my phone calls. Scott's phone then became disconnected. For
years I have been trying to find and contact Scott McClusky. Scott McClusky should be behind bars for what he has done. Since then I've heard he has ripped off at least $40,000 from Japanese fans around the world. Who knows how much money in total Scott has stolen.

For the last couple years, I’ve been checking Barry’s web site and pondered making another purchase. Hesitant to lose more money, I contacted the customer service representative, Jerry. I informed him of my past situation with this type of purchase. After reading the costumers message board, seeing all the happy, satisfied customers and speaking with Jerry, I decided to go ahead with the purchase. I also called owner/fabricator, Barry. I was happy with how he treated me as well. Barry gave me detailed descriptions on how he will fabricate the boots and when they will be ready. I informed Jerry that I would place an order after February 18, when my tax refund was available. Jerry then gave me a 10% discount on the boots. Both Barry and Jerry were able to explain everything I needed to know and answered all my questions in great detail. I would recommend anyone to them and I am very thankful to finally be getting my Gene
Simmons dragon boots.

Thank you very much Barry and Jerry.
Toshi Hatanaka