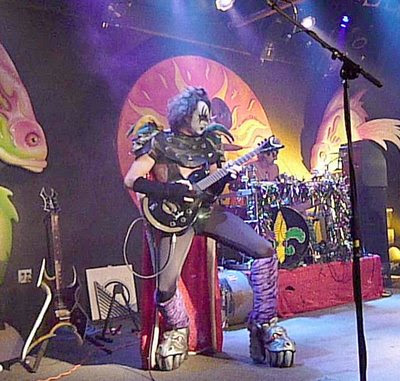 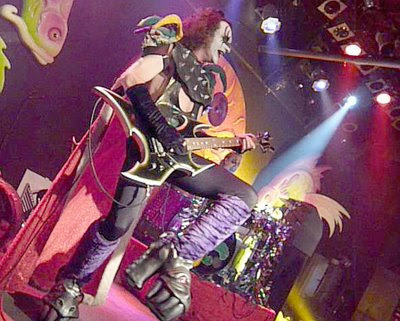 My name is Jonathan Hoerner from New Orleans. I am in a band called Bag of Donuts which is a tongue-in-cheek rock and roll band. It's like Mardi Gras all year long. Everyone in the group dresses in costume and I chose the role of Gene Simmons of Kiss since this is what I grew up on. However it's more of a caricature of Gene rather than an exact replica. I had been making my own costumes with my father for many years and finally decided to get some professional costuming done.
When it came down to the boots, I decided I wanted the real deal demon boots but I would change around the upper part of the boots and not get the scales. The man to do this I found was Barry. He was very easy to work with, understood what I wanted, and had the demon shells made sooner that he had promised. I couldn't have been more pumped when I took them out of the box. I anticipate working more with Barry in the future. If you have any questions, contact me at jchoerner@aol.com.
Posted by KISS COSTUMES at 12:57 PM 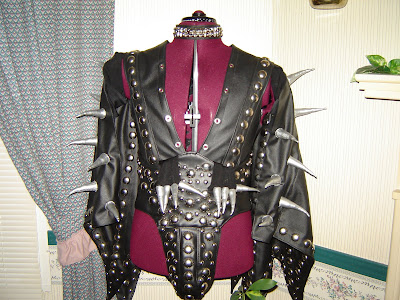 To All It May Concern,
First off..... I would like to introduce myself. My name is Scott Brady. Some of you may have heard of me before and some may not. I play the character role of Gene Simmons in a KISS tribute band here in North Carolina, have been an avid, die-hard fan for 33 years and counting, and know way more about KISS than I do my day job (lol), but it should not be alarming as we all know that if you're a KISS fan....nothing else really matters anyways, right?
Back to the aforementioned .........I have to say that I have witnessed a master of the craft at his best. I am speaking about the workmanship and craftsmanship of Mr. Barry Carr of KISSKOSTUMES.
I have had several business dealings and transactions with Barry; which dates back to the latter part of 2003. That was my very first dealings with Barry when he custom made a complete pair / set of Love Gun Batwings for my LOVE GUN costume. I had wings, but the ones I had were elementary-looking in comparison to the great works of Barry Carr.
One of our next dealings involved a complete pair / set of Destroyer scaled leggings for my Destroyer costume. Again, I had a pair of leggings custom made in New York 2 years earlier, but they just did not look authentic nor were they made of good quality materials like the ones that Barry made for me. After receiving the leggings from Barry... I looked them over from top to bottom and I just could not believe what I was seeing. The material, the authenticity, and the awesome workmanship really blew me away.!!
My most recent transaction with Barry was the order I placed with him to recreate / custom make me a ROCK THE NATION / ALIVE costume with platform boots, etc. Basically, I needed a complete costume from head to toe. Well, once again Barry has produced another fine piece of workmanship that has just got me to thinking and asking myself -- "Is there any costume or costume piece that this man can't make?" ....Well, I say "He can make them all."
I guess one of the many things that kinda caught me off guard on this most recent transaction was the fact of how quickly the turn-around time was from the time I placed my order until the time I actually received my order was like lightning fast.
All I had to do was take a few measurements that I was instructed to take, I submitted them via email, there were a few important details that we had traded a few emails on and basically...that was it.
Three to four weeks later I had a completed costume at my doorstep and the best part is....."It's a perfect fit"
I think that is the cool part being that I live several states away from KISSKOSTUMES....therefore travel was out of the question for me; especially with gas prices where they are now.
I have seen many, many pieces of work produced by others, but there is no comparison to the great works Barry Carr can produce. He gives "BANG FOR THE BUCK".
Sure, you may find cheaper prices, but you will NEVER find better quality for value, authentic looking costumes, or a better company to work with anywhere else !!!!
I will say this in closing --- "You can buy from the rest.....or....... YOU CAN TRUST THE BEST."--------> KISSKOSTUMES by Barry Carr
If you need any further information or have questions about Barry's work.....email me @ genethunder2001@yahoo.com

ADDITIONAL PHOTOS OF SCOTT IN HIS COSTUME COMING SOON.
Posted by KISS COSTUMES at 5:00 AM 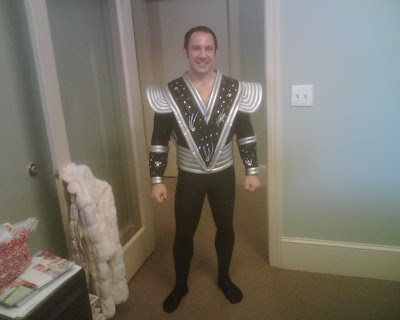 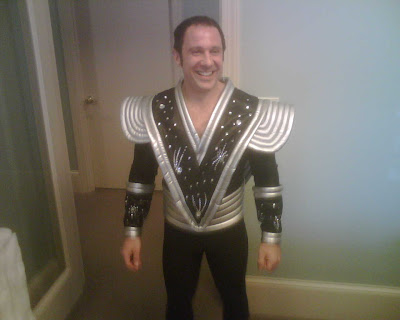 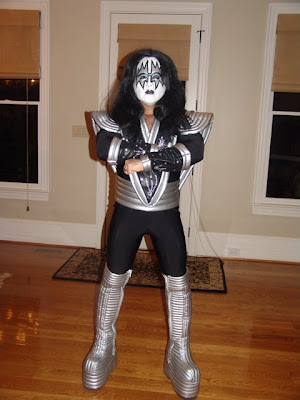 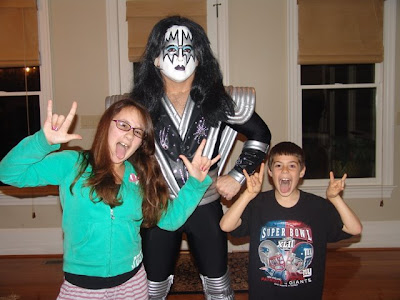 I just wanted to let you know how impressed I am with the Ace (Destroyer) costume that you made for me.

You delivered on everything you promised and more!

The fit is perfect and the attention to detail down to every stud is amazing!

The pictures don’t do full justice to how amazing the quality is on the costume.

When I put the whole thing on with the boots it was like crawling inside the Destroyer cover and being the space ace!

I look forward to working with you on future Kiss costumes and wish you all the best with your amazing company.