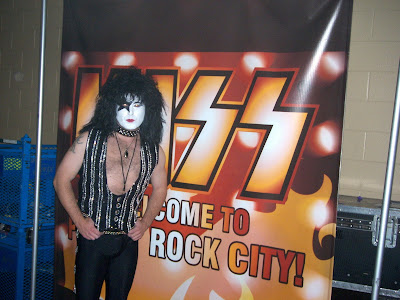 
Thank you again for the vest! I added some rhinestones to it and now it looks just as good if not better than the real thing! I was backstage at the Philly show and must have had my picture taken by 100 people.
I even had 3 roadies come up to me and say great show. They thought I was the real deal LOL! I look forward to purchasing more products in the future
cause you are the man!!

EVEN GENE SIMMONS WAS BLOWN AWAY BY MY WORK!!!! 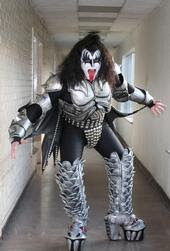 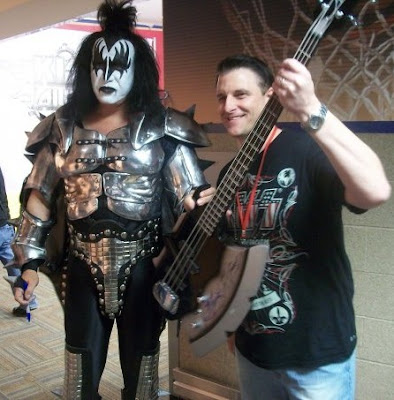 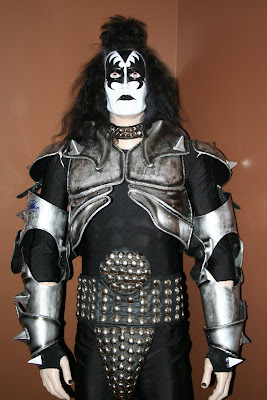 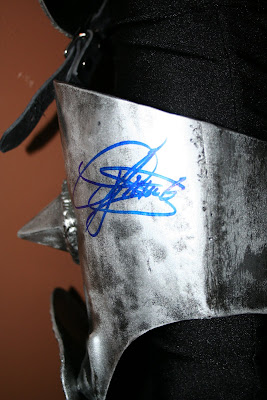 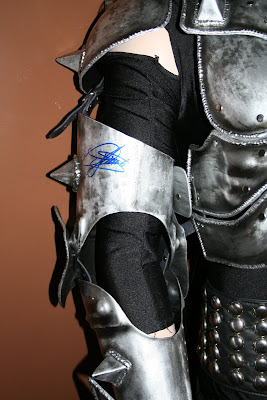 I was one of the kids that was never satisfied with watching monster movies or reading comic books. I was the guy that wanted to "be" those characters. At an early age, Gene Simmons became my Superman, Batman and Spiderman all rolled into one. I remember trying to build those early costumes with cardboard, aluminum foil and duct tape. I nearly wound up in the hospital many times walking around with stacked 2X4's taped to my shoes. When KISS mounted the reunion tour in 1996, the magic was back. I wanted my very own "authentic" looking Gene costume and I was willing to pay to have it. I met a number of characters along the way. Some of them good and many bad ones. I have been cheated, lied to and most of the times never quite satisfied with the product.
I met Barry Carr on that journey. I had often read his claims of "I am the best," "second to none costumes," "no one can top this." Saying Barry is cocky would be putting it mildly. The thing that impressed me about him was his honest love for all things KISS. He knew his subject. He wasn't just walking the walk. I have owned several sets of Gene Simmons costume armor over the past decade. I have never been so impressed and amazed at the product Barry turned out. I knew as soon as I opened the box that I had finally stumbled upon something incredible. It was like looking at Gene's 1976 Destroyer armor in my own home. The attention to details, the spikes, the rivets and most importantly the killer paint job is second to none. He has the right to brag...because NOTHING comes close to this! If you "serious" about getting an authentic KISS costume, the search is over. I recently went backstage to the KISS show in Cleveland and had Gene Simmons autograph one of the arms from Barry's armor. Not only was Gene impressed but so was Spiro, who used to play Gene in a tribute band and is now working for KISS. Spiro kept asking me if that really was Gene's armor. I was so impressed with the armor that I hired Barry to rework my Destroyer boots. I'll let you know how that one goes. In the meantime, I can't say enough about my armor. Finally, I found what I was looking for and definitely worth the price!
Bill France
"DJ-BILL FRANCE"
Posted by KISS COSTUMES at 5:07 PM